The Adventures of a Crystal Skull – Paranormal Explorer

The Adventures of a Crystal Skull – Paranormal Explorer

Are You Ready to Join Him on his World Travels?

While I call myself a world explorer linked to the study of world mysteries and the paranormal, at the same time I am a type of coach too, but I would say that I do it in a different way than you may be accustomed to. What I mean by this is that I help other people to understand more fully and to work with their inner self, or what some might call our Soul or Spiritual Essence. My goal in this article is not to delve in too deeply what this inner Essence is all about, as this part of our being can mean different things for different people. However, my plan is then, to share with you about some of the most amazing experiences I have ever had in my 63+ years of life that have taken place in some of the most incredible locations I have ever visited on our amazing planet which some call ‘Mother Earth’. I call these places that I will be taking you with me, sacred or ancient sites. Thus, I believe and trust that as you read about some of my world adventures, you will receive a better sensing of the spiritual nature and aspect of these unique experiences. And finally, how these experiences have changed my life and given it a special meaning as to my purpose of being here now. Sounds good?

First, I would like to briefly thank, Gerard O’Donovan and your wondrous editor Lovelia Caracut, for this special opportunity to be able to share with you, their members, my stories and the key wisdom and knowledge I learned through my experiences. Right then, so are you ready to proceed?

Now if you are not sure exactly what I am talking about with all this spiritual stuff or what is being called the paranormal, nowadays, don’t be concerned. I know for sure that by the end of this article you will absolutely get all of it.  Also, if you personally believe that what I am writing about sounds like fantasy or some type of fictional story, then read it as such and just enjoy it, please.  My objective is only to share my experiences as one human being to another and then let you decide what you wish to believe and thinks has some value, fair enough?

Ok then – well first of all, what the heck is a Crystal Skull – Paranormal Explorer anyway (as you see I am calling myself in the title of this article)? Let me try to define this self-created the job title for you, very briefly here. Related to a crystal skull, some of you may know a little bit of what I am referring to as you have seen the last Indiana Jones film entitled, ‘Indiana Jones and the Kingdom of the Crystal Skull’. While this was probably not the best film created so far by the trio of Harrison Ford, Steven Speilberg and George Lucas, they definitely had a large oddly shaped crystal skull play a key role within it. Therefore, a crystal skull was initially defined as nothing more and nothing less than a facsimile of a human-like and shaped bone skull that is made from pure rock quartz crystal. Actually, right now there are many modern carvers throughout the world using diamond tip tools, to fashion or carve a crystal skull (and from many different types of gemstones too beyond quartz which is now part of this definition), creating more of these skulls than you can possibly imagine even.

I can assure you, the carvers throughout the world (Brazil and China seem to be the spots with the most carvers these days) for the most part, are carvings these skulls because they have become quite popular and profitable. However, money has nothing to do what the crystal skulls are truly all about as you will discover within this article. So please stay with me.  As my personal life experiences linked with the crystal skulls will clearly demonstrate, the skulls have a very powerful purpose and they will play a special role that ultimately will benefit all of  humanity, but more about all of this later. Anyway, a crystal skull explorer simply is just an individual who explorers or researches what the crystal skulls represent, why they were created and what their possible purpose(s) might be.

The term ‘Paranormal’ which basically means ‘beyond the normal’, is more of a scientific term to describe any type of magical, mystical or unexplained phenomena happening in our physical world these days of which our scientist would like to pretend never happened.  How is that for a definition? To me this term is linked to the idea of a spiritual aspect of our existence, which is undetectable to a person, in our so-called physical normal reality, where we use only our five physical senses and there isn’t a physical device we have developed that can directly detect these other dimensional realms. So if you are not using your God-given inner senses or gifts, which are called sometimes psychic senses (there is a counterpart spiritual sense for each physical sense we have), then the spiritual realms are invisible. Even though via the research and study I have been doing recently, I am now convinced that these realms are right next to us and all around us all the time (let this comment blow your mind for a moment!).

The best way I know how to illustrate what this spiritual plane of existence might be like is to think about our radio or TV channels.  The radio/TV channels or stations are each separated by a different frequency being broadcast.  If you don’t have a radio or television set, then you can’t tune in to these channels but still these frequencies or energy waves are being broadcasted and are constantly all around us – it is the same for our mobile phones and the Wifi signals for the internet, to pick it up you need the right device.  I was even told by a good friend, whose father worked for a big American broadcast company many years ago, that there were some radio channels they were hearing people speaking on but there were no radio stations broadcasting on those frequencies (where these souls talking who had passed on – on the ‘Other-side’ as it is called?).  Enough, said, let me move on then.

Therefore, we now have paranormal researchers involved in the study of all kinds of phenomena of ghosts, hauntings, spirit communication via mediums, unexplainable phenomena like UFOs, or Crop Circles, people just appearing from nowhere, time travellers, objects being apported during spiritual séances, dimensional beings and ETs showing up, you name it. Can any of this stuff be real or is it all the imagination of science fiction and fantasy writers? Today, there are who knows, how many people that are having these strange experiences?  If you go onto the Internet, you will find thousands and thousands of websites and videos saying all of these types of strange happenings are true.

My reason for offering to you all of these definitions and discussions around the paranormal is so that you can follow me when I start to share a few of my personal unbelievable experiences that have happened to me and you won’t get lost.  Now, there is one last item I would like to leave you with before I go into my stories. The book that I am currently reading, which I found at our local library (here in the U.S, our libraries are jammed pack with amazing books we can take out for free), it is entitled, ‘Phenomena’, with the long subtitle of, The Secret History of the U.S. Government’s Investigation into Extrasensory Perception (ESP) and Psychokinesis written by Annie Jacobsen. As the sub-title implies it is the acceptance by my country’s Government that ESP and the paranormal phenomena is very REAL. According to Ms. Jacobsen, there has been a serious interest in such matters by the Allies and Germans since World War II with official programs truly taking off in the 1970’s (especially when a few gifted individuals like Uri Geller and Ingo Swann were discovered) to use the information and physical manipulations that can be done with psychic gifts to promote military based projects. The book also keeps mentioning, how the government agencies involved in researching ESP, began to realise that every person has the potential within him to develop these extrasensory abilities. 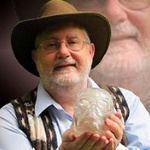 Joshua Shapiro along with his divine light partner Katrina Head are known as the Crystal Skull Explorers.  They have been working together since 2009 to share the best information they have uncovered in the world about Crystal Skulls, the Paranormal and various world mysteries.  Joshua met his first crystal skull made from amethyst quartz in April of 1983, and since then has written several books, given hundreds of presentations (North America, South America, Europe and Australia) as well as appeared on various radio shows and tv documentaries.  His last main book released in October 2018, deals with his search for a Blue Crystal Skull that he believes is connected with Peru.

To learn more about the Crystal Skull Explorers and their various activities feel free to visit their main website at:  http://www.cse.crystalskullexplorers.com

You also contact Joshua through his email at: crystalskullexplorers@gmail.com
or through various social media channels at: